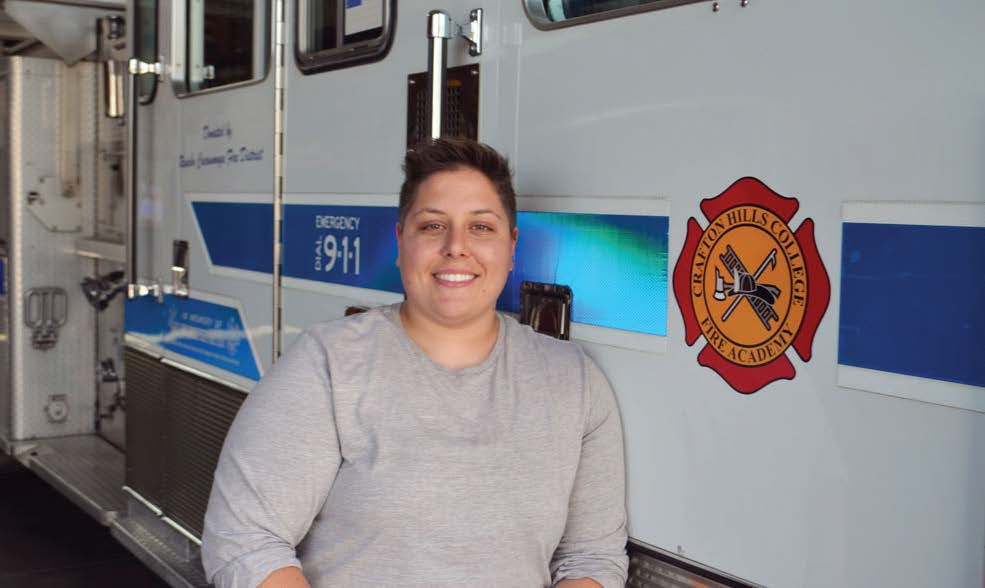 When Crafton Hills College student Sabrina Bruni was two-years-old, the house next door caught on fire. The neighbors watched the firefighters work on the scene, and Sabrina remembers seeing the firefighters return to the engines when they had done their work. One of the firefighters removed her helmet on the rig, and Sabrina saw a woman! Sabrina looked at her mom and said, “I want to do that!” She told her mom she wanted to be a “Fire fire.” Ever since that day, Sabrina has been inspired to be a firefighter and rescue medic.

After graduating from Citrus Valley High School in Redlands, Sabrina began attending Crafton, determined to reach her goal. She was forced to take a break after two semesters because of financial difficulties. She spent a year working at Baker’s Drive-Thru to earn the funds that allowed her to continue her path to her goal at Crafton. Not having a support system at home, Sabrina is grateful to retired EMT faculty member Gary Reece for taking her under his wing and encouraging her to apply for a scholarship. Sabrina handwrote her scholarship application, not expecting to be a recipient. To her surprise, she received the Charles J.C. Kean Memorial Scholarship, which enabled her to pursue her dream at Crafton. She is currently enrolled in a Fire Tech class as well as a Kinesiology class to prepare her for the physical rigors of the CHC Fire Academy.

Obstacles and seemingly insurmountable challenges are not stopping Sabrina, because she doesn’t own a computer, she spends time using computers at the College. Sabrina also assists her family and her girlfriend with expenses. She is working for an Orange County ambulance company as many hours as she can. Sabrina’s girlfriend is also an EMT, and whom she met through work.

Her struggles continue. While working a call at the Honda Center in Anaheim, her girlfriend fell on the ice while retrieving an equipment bag and suffered a concussion. The resulting MRI revealed a colloid cyst in her brain. The couple is now making payments for the needed treatments to avoid further complications.

Women are in the minority in the CHC Fire Academy. “That makes me want to work harder,” said Sabrina. “I want to take women under my wing. We can support each other without judgment and work on our flaws.” Sabrina wants the women at the CHC Fire Academy to work together and not be competitive with each other. “I’m not here to be better than you, I’m here to be better for myself;” Sabrina said. When asked how she handles the difficulties of being teased for being in the minority, Sabrina replied, “I stopped caring because I started loving myself.”