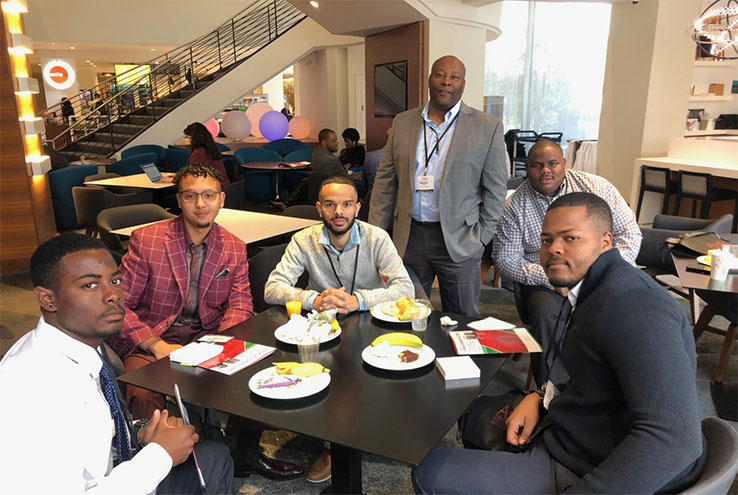 Crafton Hills College recently sent six students to the A2MEND African American Male Education Network and Development summit. The summit is an organization dedicated to fostering “institutional change within the community college system” and is made up of African American male administrators drawn from a state-wide network of schools who are committed to investing in student leadership. Crafton provided the funding for the students Robbie Brown, Richard Kearns, Tyrone Ross, Michael Taylor, Jonathan Taylor, and Solange Morris to attend the conference in Los Angeles earlier this month. Students got the chance to network with other students and staff, attend a college fair, and engage with several featured speakers and more. Paddock commented that these students “are representative of the best we have to offer on our campus” adding that “we’re just very excited to have them here on campus and thrilled that we can continue to support [..] their development as scholars and leaders.”

The six men attended a large college fair at the conference. Tyrone Ross, Student President and Communications Major who is set to transfer to the school of his choice this year, was impressed with the caliber of the fair. It “was absolutely amazing” Ross said, going on to state that “every UC,” “all the Cal States in SoCal,” as well as the Historically Black Colleges of “Howard, Hampton, and Morehouse” were there. Ross joked that he spoke to everyone and even helped other students examine their options. “It gave me a reassurance that I’m doing the right thing,” Ross said, and that “it was very helpful for me to go.” His fellow student, Richard Kearns, who plans to earn a doctorate in Psychology, agreed and commented that he realized that “this is how it’s going to start” and that attending this event “was like a shot in the arm” for his career as a scholar. Michael Taylor agreed with Kearns when he said that is was a motivating experience to be around “800 positive black men,” and that it reminded Taylor that students like him need to “explore their options” and continue to “be open-minded.”

Students engaged with the ideas and inspirational leadership of several featured speakers during the conference. Jonathan Taylor, a student of Computer Science at Crafton who has set his sights on transferring to Cal State LA to study Cyber Security, said that this aspect of the conference was “life-changing” and joked that he “couldn’t shut [his] mouth when [he] got back home.” Part of Taylor’s excitement had to do with rubbing shoulders with New York Times best-selling author Ibram X. Kendi, whose new book How to Be an Antiracist, “served,” in Taylor’s words, “as the basis for the entire conference.” Described by The New York Times as “the most courageous book to date on the problem of race in the Western mind,” Kendi seems to have made an impression on the student attendees. Kearns, studying psychology at Crafton, was inspired by Kendi’s example, and said that the “eye-opening” message he took from it was that, “You’re gonna have people try and block you,” but that ultimately you can overcome those obstacles if you’re determined enough. “I think we sell ourselves short,” Kearns said, but “we can do whatever we want to do.”

Back on campus the head of Student Life expressed her hope that this “investment in [the students’] leadership skills and abilities” will transfer to “changes that they will make when they return.” When asked about the changes they’d like to see on campus the students were unanimous in their recognition of the need for something significant. “If we could bring something back,” Kearns said, “I think it’s gotta be more than a club; it’s gotta be something that can move mountains.” The students brought up the idea of starting a Umoja Program on campus.

The Umoja Program is a statewide program dedicated to fostering the success of African American and other students. Crafton’s sister school, Valley College, has such a program in place, but Crafton does not. Crafton Hills President Kevin Horan was supportive of the students’ idea, saying that “these are the kind of spaces we want to create on campus” and that “we can absolutely support” a program like that. Student President Ross agreed with Horan, stating that, “we’re moving in the right direction [...] when it comes to setting up something like”. One thing seems certain and that is that Crafton will continue to invest in student leadership on these matters.