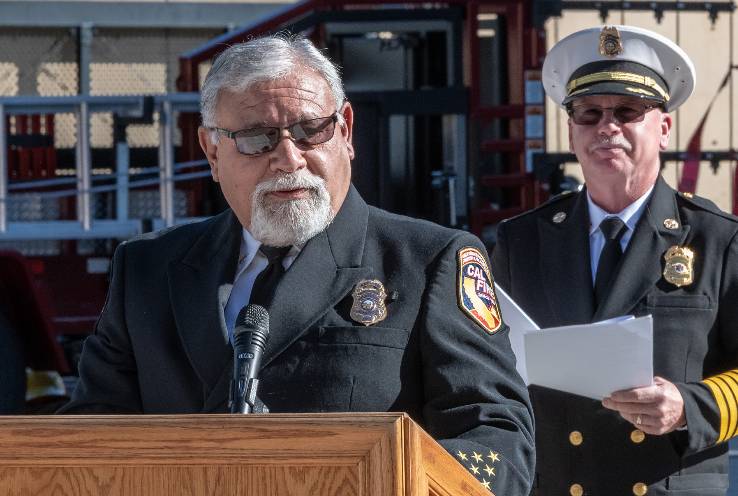 The Crafton Hills College Foundation is able to offer financial assistance to students every year because of the generosity of our alumni and friends.This year, a newly endowed scholarship fund has been established by CHC alumnus David Avila to support CHC fire cadets in perpetuity.

Avila, a graduate of the CHC Fire Academy Class No. 3, in 1983, spent 32 years in the fire service in both Riverside and San Bernardino Counties before retiring as Cal Fire Battalion Chief for the Riverside County Fire Department in 2011.

Chief Avila attributes his professional success to his life experiences and his training in the CHC Fire Academy. Avila explained that he was never an A student and that he had to put in extra-long hours and study harder than most to earn his grades.The Fire Academy was no exception. “I was competing with cadets who were legacies, sons and grandsons, of career firefighters; Firefighting was in their blood,” continued Avila. His family members worked as farmers and small business owners. He also confessed that he had to deal with a little ethnic discrimination, too. However, these factors drove him to study and practice harder, not only to keep up but to prove he was worthy of becoming a professional. It was that spark that fired up his life.

That drive kept David moving up in his career. Through continuing education at Crafton, he earned an associate degree in Fire Science, and through the California Department of Forestry and Cal Fire, Avila enjoyed a multi-faceted career that included wildland and municipal fire station assignments, land use planning, fire marshal services, training, law enforcement, emergency command center operations, and city fire chief. After retirement Avila won a seat on the Yucaipa City Council, where he served as a council member and as mayor during the Covid pandemic crisis.

Avila dedicated this legacy scholarship in the name of his mother, Dolores Martinez-Avila, who believed in him and encouraged him throughout his academic and professional career.

Avila hopes that this scholarship will assist those “everyday cadets who found that spark to do something great, to succeed as a firefighter despite the obstacles placed before them.” Specifically, Avila wants the scholarship to help a cadet who “has to practice longer, study harder, and gives 110%.A cadet who will benefit from this assistance so as to help keep their spark alive, and who hears the calling of being a firefighter, to do something greater than oneself with humility and respect.”