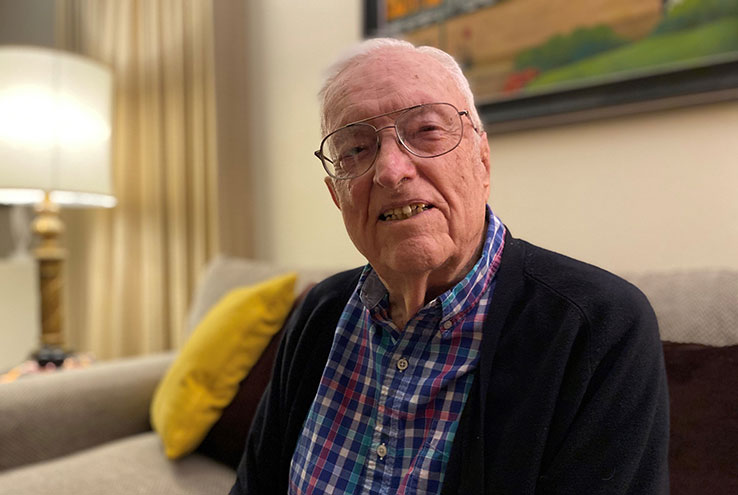 William Ahlborn, Crafton Hills College’s 2020 Outstanding Alumnus, has been quite busy in his 95 years of life. Ahlborn served in World War II, retired from Norton Air Force Base, started attending Crafton, became a professor, and has traveled the world, showing no signs of slowing down.

Three years ago, Ahlborn responded to a request for Outstanding Alumnus candidates, thinking he would never receive it. The Yucaipa-based college will recognize him and his contributions to the Roadrunner community at the upcoming fundraising gala on April 18.

"Bill is longtime and dedicated educator, and we are excited to honor him as our outstanding alumnus for 2020," said Dr, Kevin Horan, President of Crafton Hills College.  "Bill demonstrates our commitment to supporting traditional and non-traditional students in whatever their educational ambitions may be: to earn a certificate, degree, transfer, increase career and job effectiveness, or learn new skills."

The annual event—themed "Summon the Champions CHC 2020"— will spotlight the college and its supporting Crafton Hills Foundation, providing gala attendees with a dynamic overview of the impact that donations make, not only to the campus, but also to individual students.  Funds raised support students across all aspects of the CHC curriculum and programs, from those pursuing higher education to refresh career and job skills, to those wanting to teach the next generation leaders.

Ahlborn was drafted into the Army during WW II. As a member of the Second Infantry Division, he was badly wounded in January 1945 during the Battle of the Bulge in Belgium. He received a Purple Heart, the medal awarded to members of the U.S. armed forces who are wounded or killed in action.

Following his service, Ahlborn graduated from Riverside Junior College (now Riverside City College), where he became editor of a student newspaper. He then was accepted by the University of Southern California, where he was editor of another student newspaper, and graduated with a degree in journalism. After passing a competitive exam for the U. S. Civil Service, he began a 30-year career in civilian personnel, which included two years of service in Japan and five years in Thailand. "Back in the 1970s, as I was nearing retirement in Norton, I came to Crafton Hills College and took courses in a variety of subjects, hoping one of them would lead to my remaining active in my retirement years." After excelling in a course called Weather and Climate, a former dean encouraged Ahlborn to teach the course at the college. He did so. The same routine followed after he completed courses in Physical Geography, Human Geography, and Geography of California.

According to Ahlborn, "a light bulb went on." "I must be intended to become a teacher in the field of geography." With the help of CHC, he applied to California State University Fullerton, and was accepted. Somehow, he balanced working at Norton, teaching at CHC, and taking classes at CSUF. "I hadn’t studied at a university for many years," said Ahlborn, but Crafton Hills College had given me the encouragement and support to proceed.

"I was nervous and scared," Ahlborn confessed. He went on to earn a master’s degree in geography. "I never got anything but an A. I thought that was kind of impressive," Ahlborn chuckled. "I guess they thought so, too." He was immediately hired at CSUF. For a number of years, he taught at Cal State Fullerton. He specialized in geography, but also taught geology courses. While teaching days in two departments, he was asked to go to Orange Coast College to help out when a professor there had to move to another campus.

While teaching days in two departments at CSUF, and nights at Orange Coast, Crafton Hills approached Ahlborn with a novel request. The college was going to assist students who could not reach the campus during the work week. Ahlborn was to launch the program. In addition to working days and nights elsewhere, he now held classes on weekends in such locations as retirement centers, churches, bank boardrooms, and even at Patton State Hospital in Highland.

After retiring from Fullerton, Ahlborn was encouraged by colleagues to become a guest lecturer on cruise ships. This he did for 10 years, accompanied by his wife, Paula. "When we retired from doing that, I guess we had gone pretty much everywhere cruise ships go." Ahlborn said.  A life-long traveler, he has been to 150 countries, all 50 states, all seven continents, 250 dependencies and possessions, and nearly 300 national park units. "Paula kids me about being the only 95-year-old she’s ever heard of who keeps a five-year travel plan."

Despite their busy lives, the Ahlborns make sure to schedule time to give back to the school that helped mold Bill’s multi-faceted life. Currently, the Ahlborns are part of the President’s Circle, a group that supports CHC through annual contributions. Bill continues to be generous, goes through life with a sharp sense of humor, and credits Crafton Hills "with the encouragement, assistance, and inspiration to do more than fade away while watching reality TV and dozing off in a rocking chair during retirement."

Receiving the honor came as a surprise, said Bill’s wife Paula.  "It is kind of difficult for Bill to be the center of attention." The upcoming gala—which includes a dinner and live auction—is expected to raise more than $100,000 for Crafton. Tickets are now available and may be purchased online at www.craftonhills.edu/gala. To learn more about the event call 909-389-3245.