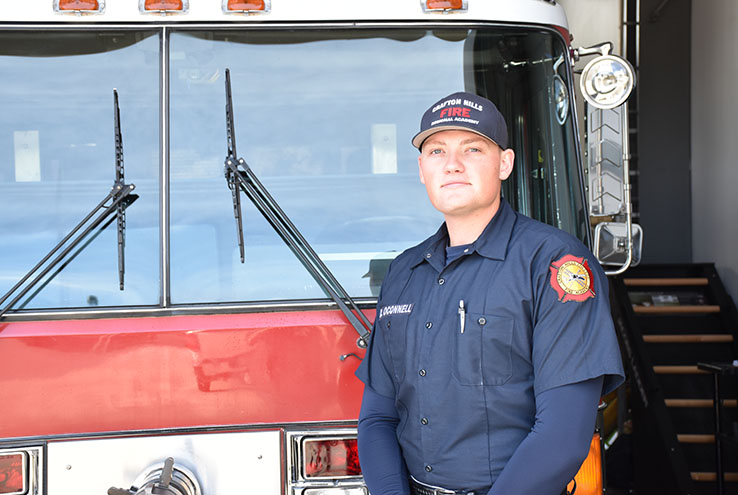 “Don’t shut a door on yourself before you start,” is one lesson Fire Academy 101 graduate and U.S. military veteran Daniel O’Connell learned while attending Crafton Hills College. He wasn’t sure how the Fire Academy worked and thought it might be too difficult to even pursue. He credits Andrew Gebara, the program’s secretary, with helping him navigate the application process and complete the requirements to be accepted into the Fire Academy, and much sooner than he imagined. O’Connell, age 23, is one of the eight military veterans that graduated with the 101st CHC Fire Academy this past December 2019.

O’Connell began his service in the U.S. Marine Corps one month after graduating from Yucaipa High School in 2014. After completing bootcamp and infantry school, O’Connell became a machine gunner in the infantry. Quickly moving up the ranks to corporal, O’Connell served as a squad leader to a machine gun section, leading over 21 Marines. He served in Japan, Australia, Guam, and South Korea. O’Connell found the Australians to be friendly and a welcome change of pace.

O’Connell’s family includes a long line of relatives answering the call to serve and protect, and he chose to follow the same path.  After his four years of service with the Marine Corps, O’Connell applied and received an “intent to hire” with the San Bernardino County Sheriff  Department, but was scheduled to attend the SBCSD Academy at a much later date. O’Connell could not wait as financial circumstances dictated the need for a faster path to income. Like many veterans before him who needed to do something to secure an employment opportunity and financially viable future, O’Connell signed up for the GI Bill, applied and was accepted at Crafton Hills College. Serving the community is also a family tradition.  O’Connell’s grandfather was a firefighter in Big Bear, his father, Tim, is a firefighter in Calimesa, and his sister also served in the Marine Corps. O’Connell made fire station visits and participated in a ride-along with a local fire department.  He appreciated the firefighter culture and saw the similarities to the Marine Corps.  O’Connell had finally found his path. He registered for a full-time schedule at Crafton Hills College, including EMT and Fire Tech classes, pursuing his goal of becoming a firefighter.

O’Connell applied to the CHC Fire Academy and was accepted. During his first week at the academy, O’Connell’s Marine experience in leadership was a contributing factor to his being elected a Squad Leader by his instructors and fellow cadets. “I like knowing which way we are moving and being able to move the ship in that direction. Being able to look at a problem, a dynamic situation, and to be able to assess it and move forward from there. Having a cohesive and solid team behind you -- there is nothing better than that! If it gets tough, we have to bite down and have some grit,” said O’Connell.

O’Connell’s father has been his biggest inspiration through this fire career process. O’Connell’s father Tim served as a Marine in a force recon platoon during the first Persian Gulf campaign and served with Special Operations. After the Marines, O’Connell’s father was a firefighter and then a sheriff deputy for 24 years with the San Bernardino County Sheriff Department, spending 17 of those years in SWAT. After his career with the SBCSD, O’Connell’s father returned to firefighting and now serves with the Calimesa Fire Department. Tim O’Connell also earned his Master’s degree in business while managing his public service career and duty to family. O’Connell is continuing his education and currently is enrolled in the paramedic program at Crafton. The family legacy continues.

The CHC Veterans Resource Center is an information center to assist with any questions concerning veteran educational benefits or educational experiences at Crafton Hills College. The VRC also houses the Veterans Certifying official who serves as a liaison between veteran students/dependents and the Department of Veterans Affairs. The VRC also provides a safe environment for veterans to study, socialize and relax between classes. For more information visit the VRC , located in the Central Complex 1, Office 150 (next to Campus Police).  Mon – Thurs 10 a.m. – 5 p.m.