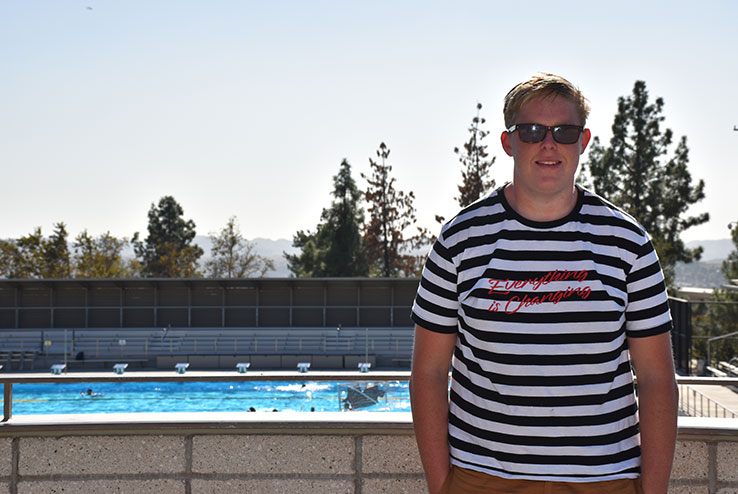 Austin Olive hopes to make the Paralympic swimming team in 2024.

The 18-year-old Yucaipa resident is working hard to improve his time in the water and build his muscles. But along the way, Olive will have to qualify for a chance to make the team during events like the recent California Classic at Crafton Hills College.

Held October 26 and 27 in CHC’s Aquatics Center, the Classic - hosted by US Paralympic Swimming - put a spotlight on para-athletes looking to showcase their abilities as they compete against their peers in several events.

The meet was open to swimmers from all over the United States with any physical, visual or intellectual impairment. Several will move on to the Paralympics next year in Tokyo, while others like Olive are focused on future Games.

Olive – or Auggie as he’s known – found swimming after he found it difficult to keep up with his peers on the baseball field. Diagnosed with Cerebral Palsy, swimming opened several doors for Yucaipa High School alumnus, particularly when it came to addressing his competitive spirit, said a family member at the event.

“Swimming makes me feel weightless,” said the current CHC student. “When I’m in the water, I don’t feel anything weighing me down both emotionally and physically. My stress and anxiety go down when I’m in the pool.”

Several athletes at the Classic have similar stories, some of which are known while others are still being discovered. Event organizers invited the community to the event with the intent of introducing competitors to local residents.

Several took US Paralympic Swimming up on its offer.

“One of the greatest things about this day in age is the Games are becoming more and more visible,” said Erin Popovich, associate director of the organization. “And when we can involve communities who do not get to see the Paralympics in person or on TV, once they see something like this, they understand it.”

The next stop for Augie and the other 44 Classic athletes is the National Championships in Dallas, Texas, in December. Popovich said the championships will lead to the Paralympic Games in Tokyo next summer. And then the fun starts all over again in anticipation of the 2024 Games in Paris, France, she added with a chuckle.

Twenty-twenty-four sounds like it is a lifetime away, but Augie has no plans on slowing down just yet.

“It’s pretty cool how fast I can swim even though I’m getting older and my muscles are growing,” said Olive. “Just because someone has a disability doesn’t mean they should be counted out. Do not ever give up.”

You can follow the progress leading to the Paralympics online at www.paralympic.org/paralympic-games.