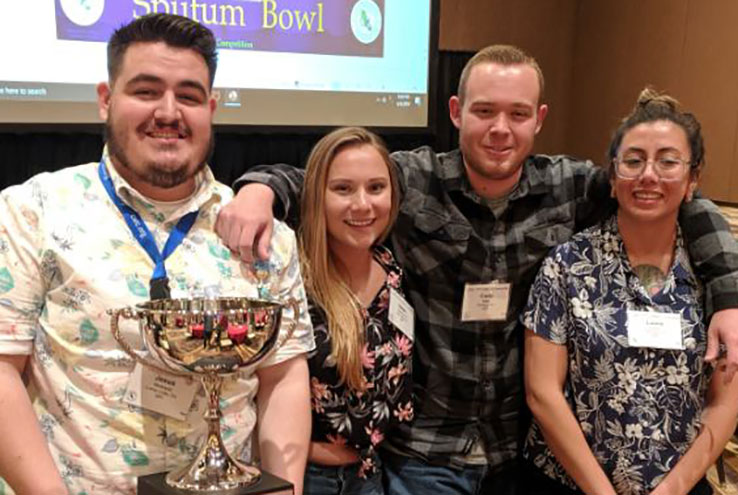 The Crafton team consisted of Jesus McDowell, Sarah MacDonald, Cody Miller and Laura Kinkey. The students are in their third semester of the program and are scheduled to graduate at the end of the fall semester. The team was led and coached by Michael Sheahan, program director.

“This is a big deal and we’re very proud of them,” says Daniel Rojas, director of clinical education.

The Crafton team will be sponsored by CSRC to compete at the national level in New Orleans, November 9-12, 2019, during the AARC Congress.

The Sputum Bowl is a time-honored tradition at the American Association for Respiratory Care (AARC) Congress since 1978.  According to the AARC website, “uniquely “RT,” the Bowl is the number one place to test your respiratory care knowledge against the best of the best in the profession. Nowhere else will you find therapists cheering on teams from across the country as they race to answer questions on everything from aerosol delivery to arcane gas laws.

Fun features like “Ask the Expert,” “Risk/Reward,” “Ask the Posse,” and “Video Visuals” add to the excitement, and live streaming on Twitter guarantees everyone has a chance to keep up with the action.

Here’s how it works. A Student Sputum Bowl team consists of three people sitting at a table. Close to them is another team of three seated at their own table. Both teams will listen closely when the contest question reader verbally calls out a question that concerns some aspect of respiratory care. The team that buzzes in first has 10 seconds to answer correctly and score a point. At the end of 10 minutes, the team with the most points wins.”

As one of the 115 colleges in the California community college system, Crafton Hills College is committed to providing citizens in the region with an accessible higher education. The philosophy of California's community colleges is that education is the key to better jobs, a better economy, and a better quality of life.   CHC offers over 50 degree programs and 25 occupational certificate programs.  For more information, go to www.craftonhills.edu.