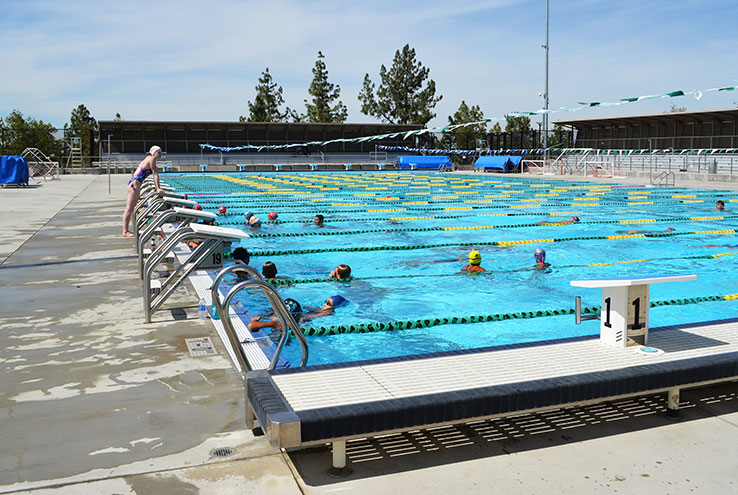 According to Danielle Montenegro, the college’s water polo coach, students have been recruited from Beaumont, Yucaipa, Redlands, Redlands East Valley, Citrus Valley, Cajon, and Pacific high schools. Both men’s and women’s teams have been formed and will play their first conference game on Sept. 25 against Miramar College in the CHC pool.

Montenegro notes that recruiting went really well. “We are looking at a pretty great first year. There is a lot of interest in water polo in this area,” she says.

Montenegro comes to Crafton after having worked for three years as an assistant water polo coach at Mt. San Antonio College in Walnut, California. Before that she coached high school and club water polo. She herself played water polo in high school in Los Angeles and won two CIF championships. She went on to play four years at Occidental College, where she was a four-time All-American.

For now, Montenegro will be coaching both the men’s and women’s teams, but Crafton does plan to hire assistant coaches and hopefully a second head coach to work with the men.

Crafton is also finishing its second year of competitive swimming under the direction of coach Courtney Eads. Hannah Stark, a Yucaipa High School grad and member of the CHC Swim Team, says, “We are still pretty small—about 14 swimmers. Next year we hope to double in size. We’ve been to other schools for meets, and we do have one of the nicest pools around.”

The pool itself has a very interesting history.  According to Heather Chittenden, the Aquatics and Athletic Director at the college, it was originally the Olympic trials pool in Long Beach, California.  After the 2004 trials, the City of Yucaipa was able to purchase it, and in 2010 the San Bernardino Community College District (SBCCD) installed it as part of an aquatics center at the top end of the Crafton campus.

“This is the only public 50-meter pool in San Bernardino County,” says Chittenden. The pool has an 8-lane long course (50 meters) and a 20-lane short course (25 yards) and is 7 feet deep throughout. It was a first of its kind Myrtha pool—a modular system built from stainless steel and PVC.

A board showing the long course pool records set when the pool was used for Olympic trials is posted on the wall next to the pool. It lists many familiar names, including Natalie Coughlin, Aaron Peirsol, and Michael Phelps.

Crafton faculty and students are excited to add competitive water polo to the school’s line-up.  “Until now,” says Montenegro, “local high school students who wanted to play community college water polo had to go to RCC or Chaffey. This is a great addition to the Redlands-Yucaipa area. Many of the local kids have grown up swimming in this pool. It’s a natural place for them to be.”

“There is still room for a few walk-ons on both the men’s and women’s teams,” Montenegro notes. “If you are interested, contact me at dmontenegro@sbccd.cc.ca.us.”