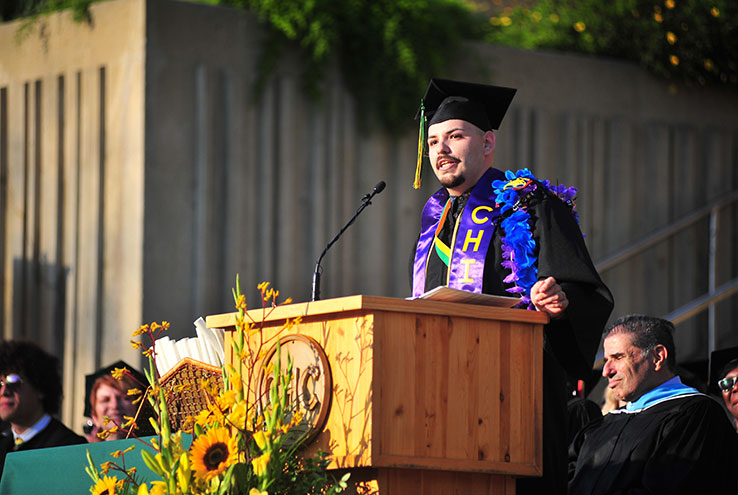 According to the poet William Butler Yeats, “Education is not the filling of a pail but the lighting of a fire.” And Anthony Abate, the Crafton Hills College commencement student speaker who quoted Yeats, proved fires can be re-ignited through education.

“What almost extinguished the fire that is my passion, was the insecurities and self-doubt that I have carried with me since the day I dropped out of high school at the age of 16. That day the fears of being incapable and realities of failure rained down on an already dampened flame. From that moment of self-doubt, it took me ten years to realize that I had to burn the bridges between myself and anything trying to extinguish my flame. Once those negative bridges were burned, I was left with embers to light the way to this very moment,” he said.

“Theologian Albert Schweitzer explained this best,” he continued, “In everyone's life, at some time, our inner fire goes out. It is then burst into flames by an encounter with another human being. We should all be thankful for those people who rekindle the inner spirit.

Whether this is a reigniting of a flame once put out or a first spark in your journey I encourage you all to surround yourselves with those who fan and fuel the flames that are your passion. We are fortunate enough to be students at a campus filled with people who do just that.”

Abate recognized important faculty and staff in his journey at Crafton Hills College, as well as friends and family, before encouraging the Class of 2019 to “stay lit.”

Crafton’s newest class is composed of 678 graduates who earned 761 associates degrees and 361 certificates. Of those degrees, 43 percent are associate in arts or science degrees which guarantees admission and junior status into the California State University system.

This year’s class is also quite diverse with 45 percent of students becoming the first in their families to graduate from college or earn a post-secondary certificate.

Thirty-four graduates are military veterans. The youngest graduate is 18 and the oldest is 68.