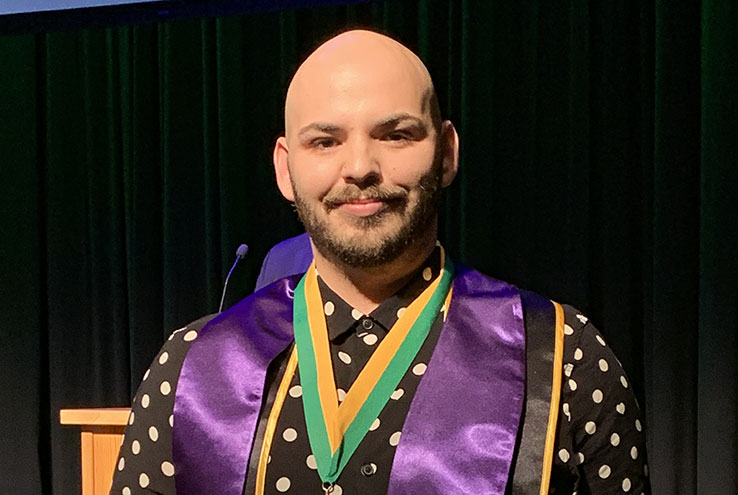 Anthony Abate receives the President’s Award of Distinction during Scholars Convocation on May 17. He will graduate with three degrees and be the commencement speaker for Crafton Hills College on May 24.

When Anthony Abate graduates from Crafton Hills College on May 24, he’ll walk away with three degrees. But among his many accomplishments as a college student, the one that took him by total surprise was being named this year’s President Award recipient.

“I was actually completely in shock,” said Abate with a chuckle.

While hard work and dedication to his studies is credited in helping the 28-year-old Cabazon resident accomplish his goals, the journey to graduation day wasn’t easy.

A high school dropout at 16, Abate said he took an “untraditional road to life” which took him a while to “reach a level of stability.”

Before becoming a Roadrunner, Abate made a name for himself in retail and quickly moved up the ranks. Although he enjoyed what he was doing, Abate said his main objective wasn’t about sales, but about developing people and their talent. “I was passionate about helping people realize their full potential regardless of their circumstance,” he said. “What I did was hire people who had school schedules because no one else did. But I decided that these kids - well, some of them were a bit older - had goals and were doing their best to reach them, and that’s what I wanted to do.”

It was while talking to a coworker about his desire to go back to school and help others like him that Abate learned about Crafton. But he believed not having a high school diploma stood in his way. He was wrong.

“She told me, ‘No, you can go to a community college and get a fresh start.’ And, so, the next day I went to Crafton and took an assessment test,” Abate said.

Abate got “heavily involved” in campus life and was later named an ambassador for Crafton’s Honors program. Others, too, noticed his hard work, including Judy Cannon, honors coordinator, who recommended Abate for the college’s Medal of Distinction.

“He has shown strong leadership skills and has impacted the Honors program in long-lasting ways,” she wrote in her nomination packet. “It has not been completely smooth sailing along the way as Anthony has challenging personal circumstances…, (but he) represents one of the strengths of CHC: creating scholars. I am so proud of what he has accomplished.”

Abate, too, is proud of what he has accomplished, and although the merits are still trickling in, he said he is “humbled” by it all. “None of this came easy and is just an honor to be nominated” for any award, Abate said. “That night at convocation (on May 17) when (Dr. Kevin Horan) got up there and started talking about the President’s Award I think it was about two sentences in that it clicked he was talking about me.

“Up until this point I haven’t had a moment when I’ve been rewarded for the work I’ve done aside from a promotion and a pay raise, and to achieve all of these things is just all very humbling and it’s amazing,” he continued. “If I can do it, that means anyone literally can do it.”

Abate plans to attend University of California, Riverside in the winter where he plans to earn a bachelor’s in sociology and a minor in communication sciences. And although he is leaving Crafton to pursue his next step in life, he’ll be back. “I’m so thankful for this experience, this school and the people I’ve met,” Abate said. “My goal after leaving Crafton is to come back and donate to the Foundation or be involved in another aspect or two. My goal is to give back to what has been given to me.”