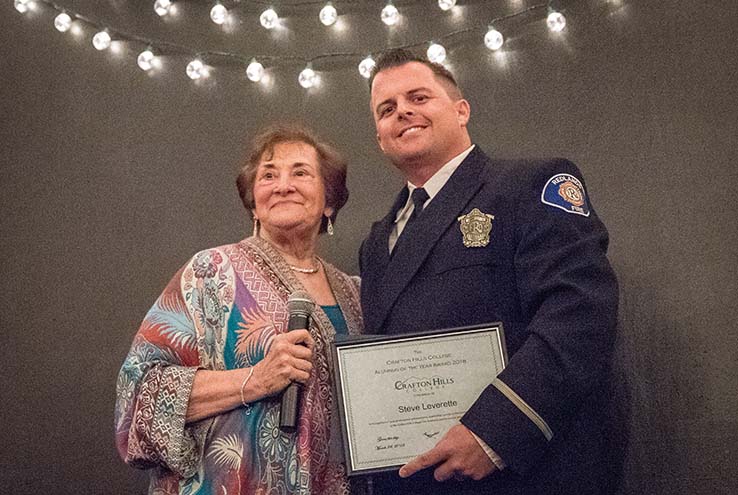 Steve Leverette, a six-year veteran of the Redlands Fire Department and a 2005 Crafton graduate, was selected for the designation from a pool of nominees for his work giving back to the community he serves.

“This is really surprising,” said Leverette. “It’s pretty humbling being a firefighter. Naturally people look up to you, but for me, I’ve gotten the most out of the job by being a servant of the community.”

Leverette, 34, grew up in Mentone and is a 2002 graduate of Redlands East Valley High School. He joined the Redlands Fire Department’s Redlands Emergency Services Academy (RESA) the same year. The weeklong program provides high school graduates a hands-on look at careers in police and fire.

Leverette said it was RESA and meeting Donna Ferracone, a program advisor and former dean of career and technical education at Crafton, that turned him on to becoming a firefighter.

Leverette enrolled at Crafton in the summer of 2002 and became an EMT shortly thereafter, he said. After graduating from CHC, Leverette continued his education in the field by graduating from paramedic school in December of 2006.

Before joining the Redlands Fire Department, Leverette worked with Cal Fire in Highland for five years as a firefighter/paramedic. He began working with Redlands Fire in 2012 where he plans to stay for the remainder of his career, he said.

Along with his day-to-day responsibilities, Leverette has worked behind-the-scenes coordinating several fundraising events, including the Bowling for Burns tournament and Redlands Classic Car Show held annually. Proceeds from both events support the Burn Foundation and the Redlands Fire Benevolence Fund.

He also works with CHC students as a preceptor in the college’s paramedic program.

Leverette said none of the work he has been able to accomplish could not have been done without the support of his wife of 10 years, Erin, and his three children: Emma, 9, JT, 8, and Claira, 6.

Now in its fourth year, the Outstanding Alumni Award is given to a CHC graduate who has exemplified the dynamic and positive qualities the Crafton experience can produce. Nominees can either self-nominate or be nominated by someone else and must meet certain criteria, from demonstrating achievement of exceptional nature and show professional growth within their chosen career field, to showing impact in their community through leadership and/or volunteering.

Amanda Ward, a CHC adjunct professor and field coordinator for the college’s paramedic program, nominated Leverette for the award.

In her nomination form to award’s the selection committee, Ward spoke of Leverette going “above the call of his normal duties by volunteering his time to coordinate several events” and “truly embodies what both the fire academy and paramedic programs are all about.”