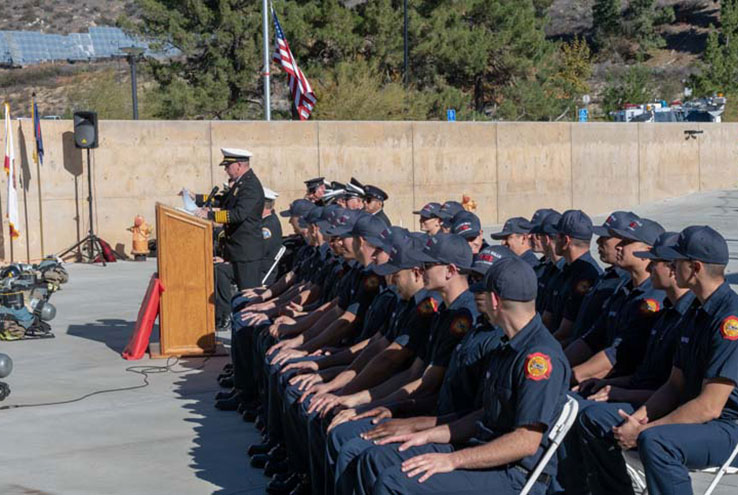 After his mother was involved in a traffic collision, the 37 year old Colton man said he was inspired by the first responders who arrived on scene.

After talking it over with his family, Sandoval made the decision to apply for Crafton Hills College’s most recent Fire Academy, successfully completing the program along with 26 other cadets whose hard work was recognized on Saturday, Dec. 15.

“The whole experience was amazing and changed my whole vision of working with younger cadets,” he said. “The hard work put in to graduate was just the tip of the iceberg.”

Academy Chief Mike Alder called this most recent group of graduates one of the best he’s led, adding that while Crafton’s 99th academy class started with 27 cadets enrolled, each worked together to keep that number intact throughout the program.

While some roadblocks were thrown its way – one student dealt with a cancer scare and another faced potential financial troubles – cadets rallied around one another and worked collaboratively to find solutions when needed, Alder said.

“They wanted to make sure no one washed out of the program,” he said. “This academy showed the best teamwork I have ever seen.”

“Just over the course of the 16 weeks you build bonds with people you thought you weren’t going to click with immediately. It just meshed well,” he said. “Chief (Alder) said this was the best academy he’s done, and we thought, ‘Nah, he’s just blowing smoke.’ But this was the best group I’ve seen. We just all stuck together.”