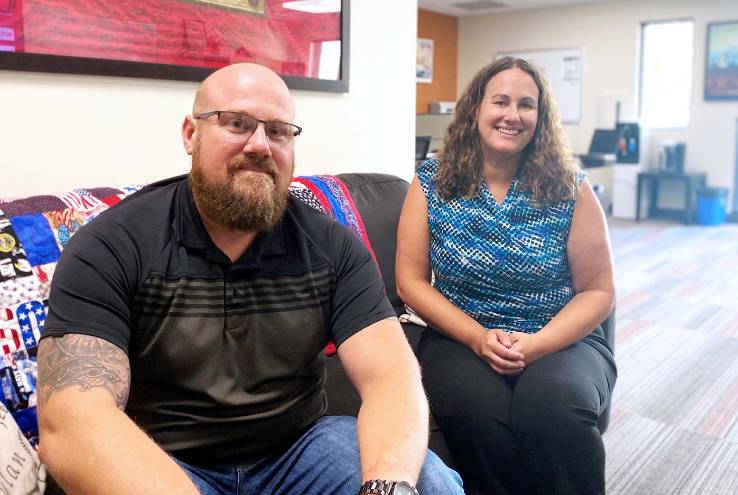 Since its 2018 opening, the Veterans Resource Center (VRC) at Crafton Hills College has connected veterans with educational services as well as a place to unwind.

The VRC offers an array of resources for veterans and their dependents to help them transition from military to civilian life in an academic environment. Students using VA educational benefits are invited to drop in to ask about their benefits, study, use the computers, grab a snack from the pantry, or take a break from classwork and watch their favorite movie or television show.

Best of all, the VRC is run by veterans and those with close ties to the veteran community themselves.

Steven Rush, veteran’s services coordinator, knows first-hand how difficult it can be to adjust to civilian life post-service. A Crafton alumnus himself, Rush says he too could have utilized benefits the VRC now offers during his college days had the VRC existed. Now that he is coordinating the center, this Army veteran has helped mold the VRC into what it is today – an operation that meets the different needs of student vets and connects them to other campus services and resources.

“We also connect students with off-campus resources. This provides additional support that we may not provide on campus,” explains Mills.

Rush added, “We provide a reassurance that if you come [to Crafton], we will take care of you. We’re not going to let you fail.”

On an average morning,VRC staff are doing their daily hustle and bustle by answering calls and emails and catching up with one another. Between the goings on sits two work study staff members, 19-year-old Gabriella Herrera and 29-year-old Aaron Schardein busy working on processing student documents.

Herrera, a dependent of an Army veteran, said she heard about the VRC through a relative – a San Bernardino Valley College alumnus – and says the study lounge is one of her frequently visited spots on campus as she studies for a career in emergency medical services. “And Steve [Rush] also works around my class schedule for working here as well,” Herrera added.

Schardein, an Army vet stated, “I enjoy the VRC because everyone is friendly and supportive - it is peaceful here.”

Although the VRC focuses much of its energy on educational success, it also provides something not all veterans and their dependents have equal access to – comradery. By veterans building a relationship with other vets on campus – and dependents as well – they are able to lift up and support one another.

“Our veterans benefit from having a place that they can come to and freely express the difficulties they endure during transition from military to civilian life,” Said Rush. “For instance, being conditioned into a very disciplined environment to an uncertain environment can cause frustration.”

Mills goes on to explain, “The VRC is a place where veterans can come to let their guard down. I also believe that being a non-traditional student, veterans come to Crafton feeling behind in their education. Things are not always going to translate well in the classroom, but they can come here and see other veterans who are having success.”

To learn more about the VRC or to start your Crafton journey, send an email to veteransservices@craftonhills.edu or call 909-389-3396.