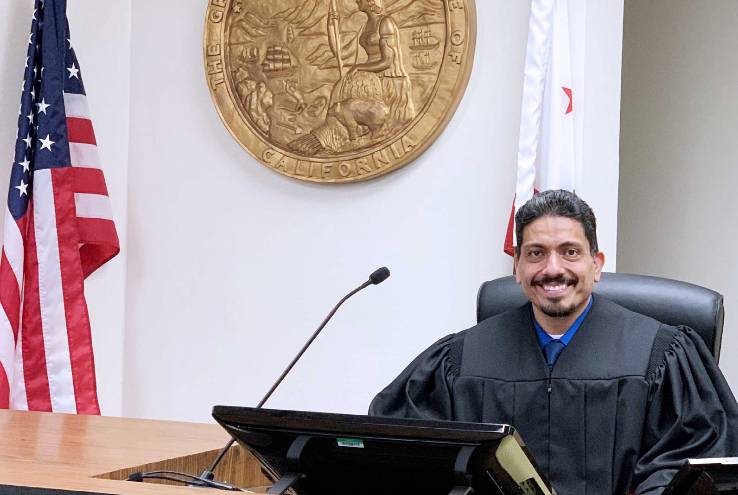 A Roadrunner is one of our newest San Bernardino County Superior Court judges.

Damian G. Garcia was appointed to the bench in July, adding to a successful career as an attorney. When asked how he wanted to be remembered in this new role, Garcia replied, “I would just like the perception to be that Judge Garcia is a good judge. He’s firm and he’s fair, and he does a good job.”

But most importantly, the 46-year-old Beaumont resident said he wants the public to get to know his story.

“I want to be known within the community particularly by going around to different schools and work [places] to break down the barrier by giving disclosure to young people about exactly what a judge does,” Garcia said. “There’s a lot of unknowns about this position.”

Born and raised in Redlands, Garcia said he was the first person in his immediate family to go to college – “My parents were just happy that I got my high school diploma,” he said – but Garcia set his sights on higher education. However, he did not have the prerequisites to attend a four-year university right after graduation. Instead, he attended a little community college located on the hills of Yucaipa: Crafton Hills College. “That’s where I blossomed,” Garcia explained. “It was a whole new world. I got to do what I wanted, and I liked the independence.”

After completing his general ed courses, Garcia transferred to the University of California, Riverside, where he earned a bachelor’s in political science. From there, he went on to get a master’s in business with an emphasis in computers at the University of Redlands.

Originally, Garcia had his sights set on becoming a police officer, but his mom and his then-wife thought that career was too dangerous. “At the time I was working in banking. And while getting my MBA, I had a business law class where I got the highest grade, and it was in that class where my professor asked me, ‘Why don’t you go to law school?’” he explained.

So, Garcia did. Right after graduating from the U of R, he passed the Law School Admission Test (LSAT) and was accepted to the University of La Verne’s law school. In 2005, Garcia entered the job market with his law degree in hand, though he had no experience in law. But a local firm took a chance and hired Garcia as a clerk and, later, a full-time attorney after he passed the bar.

Soon, Garcia became partner and was co- leading the firm – Banks, Garcia & Janis, based in Rancho Cucamonga – before a Zoom meeting about how to become a judge changed his career direction.

He learned that San Bernardino County’s population is composed of 40 percent Hispanics, but only 11 percent of the judges serve on the San Bernardino County Superior Court are Hispanic. Garcia took that meeting as his new calling. “After that, I knew I wanted to help diversify the bench,” he said.

Balancing a career, fatherhood, and his desire to serve the community may seem a lot for a judge to juggle, but don’t doubt Garcia. He has a plan to succeed, and that plan includes coming back to Crafton Hills College to serve the College.

“Crafton was a gift, a springboard for those – a lot of folks like me – who don’t have the right grades or the financial resources right off the bat to go to a four-year,” Garcia said. “But once I got settled in, I joined some different organizations and thrived, and I want to do some outreach to inspire [others] by showing them my example about how I got here.” He recently served on the Crafton Hills College Foundation Board of Directors.