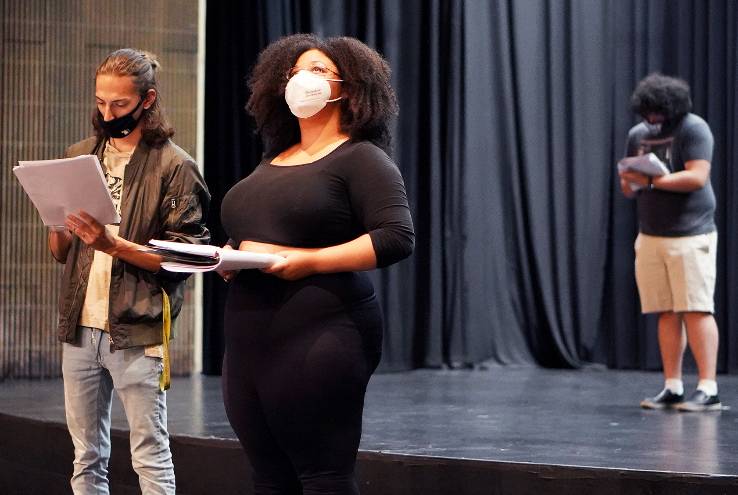 The stage is set for live theatre to return to Crafton Hills College this October.

And to celebrate, theater students along with the department head Paul Jacques, will present the world premiere production of Helen, Goddess of Arson, by Baylee Schlichtman.
The play tells the story of Helen of Troy before given that moniker and was selected by Roadrunner theatre students last summer, said Jacques. And with theatres across the globe celebrating a new season of curtain raisings following the pandemic and with many eager to tell women-centric stories in popular media, Jacques said the production was a no- brainer.

The story begins around the time when Helen – then a princess of Sparta – became of age to be married. Helen tolerated her suitors, which included some of the most handsome warriors in Ancient Greece who compete for her hand.The story turns when Helen’s attention shifts at the arrival of Menelaus of Mycenae, a bumbling prince who harbors grievances. After he is chosen, their unlikely bond brings to light Helen’s quiet resentment toward her patriarchal world. When tragedy strikes, Helen must make a choice. Does she choose love, her autonomy, or something else?

“Helen is one of these figures that never gets a deep dive into the character,” explained Jacques.“And of all the plays we read, this was a delicious read.”

“Paul [Jacques] always mentions to us that the show is so good because it tells a part of the story that is unknown,” said Grace McCray, a 21-year-old Crafton student who assumes the lead role.“Helen herself is a complex character.”

Along with McCray – a theatre arts and history major – rounding out the cast is Tara Quick as Helen’s sister, Leda; Sebastian Hernandez as Menelaus; and Jacob Brantmeyer, Enggie Ocampo and Joshua Tongpo as Chorus members 1, 2 and 3, respectively. Jacques directs.

The current Fall term has marked a bit of a return to normalcy at Crafton since the start of the pandemic, with some students returning to in-class learning and the planning of year-round events. Helen will mark the first time a production has been performed in the Crafton Performing Arts Center since Spring 2020, and there’s a sense of excitement in the air, said Jacques and McCray.

“There’s a lot of energy,” Jacques said. “The students are excited to be here and are getting back into rehearsal mode after being off stage for so long. Everyone is very, very focused.”

Added McCray,“It feels like I can breathe again, literally. I’m one of those actresses that’s neurotic when it comes to acting. It was really, really hard doing theatre on Zoom and our group got really, really small.

“Live theater is all about the audience,” McCray continued.“It is the life blood of theatre.”

Performances of Helen run at 8 pm Oct. 1 and 2, and 2 pm on Oct. 3.Tickets are $5 per person and can be purchased online at www.craftonhills.edu/tickets or at the Performing Arts Center Box Office the day of each show.