From Crafton to Harvard: One student’s journey to the Ivy League Skip to main content

Home » News and Public Relations » From Crafton to Harvard: One student’s journey to the Ivy League

From Crafton to Harvard: One student’s journey to the Ivy League 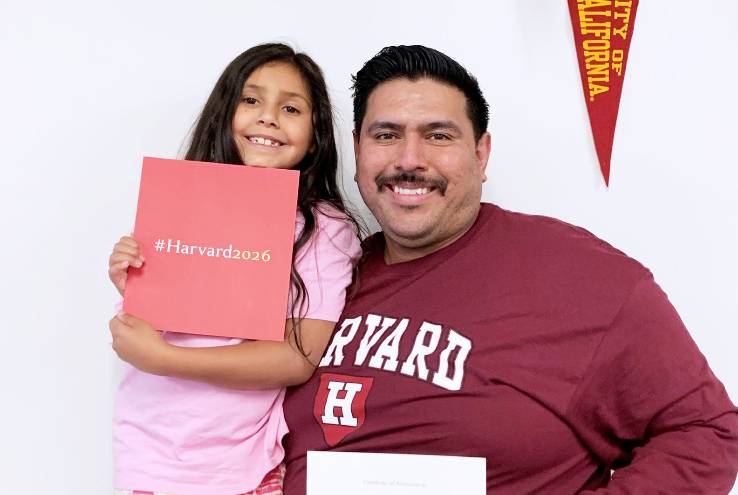 Crafton Hills College transferring student Jose Aaron Rosales is packing his bags and heading to Harvard in the fall.

The Rialto resident received the news via email on March 31 while he was having dinner with family at a Texas roadhouse.

“It was such a hard week after burying my grandmother and here I am bawling,” the 33-year-old recalled after opening his acceptance letter on his cell phone. “I turned the phone to (my wife) and showed her what it said. She gave me a big hug. Only a few people knew I applied because it was not a guarantee I’d get in.”

The first-generation college student’s road to Harvard was difficult, but Rosales credits the height of the COVID-19 pandemic for changing the trajectory of his life, explaining, “the pandemic really was an eye-opener. I was limited in what I could do to help without a medical background. So, my wife and I talked about me going back to school.”

Rosales worked to do just that by connecting with two nonprofits dedicated to providing military veterans like him, who had served as a Marine from 2007 to 2015, a crash course in college life. While going through the process of trying to find the right school, he learned about Crafton Hills College and its high transfer rate and made a phone call.

“Lisa Mills (a counselor) at the (CHC) Veterans Resource Center picked up the phone on the first ring, and that’s how my journey at Crafton started,” he said.

Rosales quickly immersed himself in classes focused on his major – Physics – taking as many classes as possible. He then decided what to do next: apply for a four-year college.

With his 4.0 grade-point-average, Rosales said he connected with Crafton’s Veterans Resource Center and Transfer Center as well as the nonprofit Service To School for help. Service to School is dedicated to supporting servicemembers and veterans looking to accomplish “their next chapter for leadership by helping them gain admission to the best college or graduate school possible.”

Rosales said both resources worked with him to prepare application requirements for consideration. He then connected with someone at Harvard, who relayed the reality of the situation: Rosales might not get in. “... [O]ut of (the many) applicants, they only took 954. And out of that 954, only 18 of them were veterans and I was one of them,” he said.

Currently, Rosales is preparing to move back east to attend the university with his wife, Christina, and eight-year-old daughter Audreyana. He expects to graduate with the Harvard Class of 2026 with a bachelor’s degree in Physics. Post-graduation, he plans on attending medical school and after that, he said, “give back by helping our veterans.”

“I couldn’t have done any of this without the support of my family, the nonprofits I worked with and Crafton,” Rosales said. “It was a team effort.”