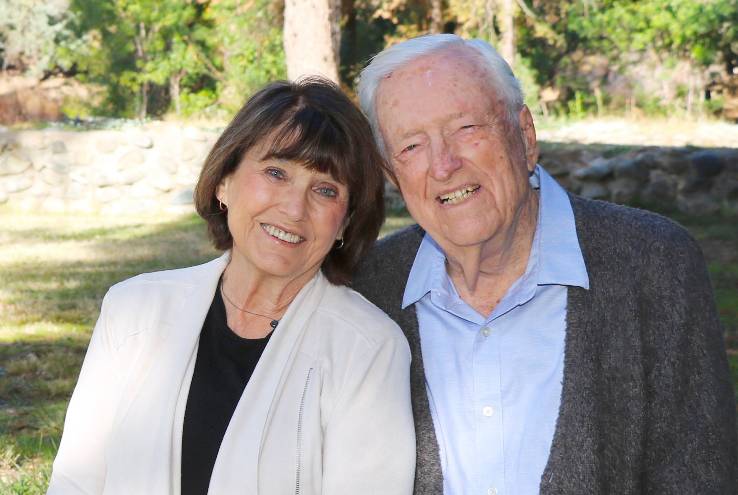 Bill Ahlborn is a proud alumnus of Crafton Hills College (CHC), an institution that, he said, has played an important role in his life for the past 40 years. In gracious recognition of his and wife Paula’s contributions to the college, CHC will be dedicating a courtyard in their honor, and media is invited to attend the ceremony.

Bill’s love of travel started with World War II when he was sent to Europe. There he received the Purple Heart for action in the Battle of the Bulge. Bill’s first career was in journalism. Then he worked as a civilian employee for the U.S. Air Force overseas and at the Norton Air Force Base in San Bernardino.

When Bill left the Air Force in the 1970s, he decided to try a few CHC courses to keep him active during his retirement years. His experience there lead to his teaching not only at CHC, but at California State University, Fullerton and Orange Coast College.After he stopped teaching in higher education, he continued to give lectures and lead desert field trips. He also served as a guest lecturer with various cruise lines for ten years.

Bill said he gives CHC all the credit for inspiring him to share his knowledge and love for geography, geology, weather, climate and deserts all around the world. Bill has now visited 150 countries, all 50 states, all seven continents and around 400 national parks.

Several years ago, Bill and Paula began to “pay it forward” by supporting students at CHC and joining the college foundation’s President’s Circle. Bill was named CHC’s Alumnus of the Year in 2020.

It is now Bill and Paula’s desire to create a legacy that supports CHC students in their educational journeys. In grateful recognition of their generosity, CHC, with the approval of the Board of the San Bernardino Community College District, will rename the Canyon Hall courtyard as the “William O. and Paula B. Ahlborn Courtyard.”

The Ahlborns’ investment will benefit students through annual scholarships and program enrichment experiences, such as field trips and sending students to academic conferences, in perpetuity. The contributions will be held with the CHC Foundation. Funds will be invested, and the interest earned will generate an annual distribution to support the earth sciences program and students.

Naming rights can be bestowed with gifts to the CHC Foundation.A new blended gift option is available for naming opportunities at Crafton Hills College. Blended gifts include an initial gift that establishes an endowed fund and is invested for growth, a long-term pledge of annual gifts to support the scholarships or programs, and an irrevocable bequest that once realized will fully fund a permanent endowment.

For more information on naming facilities, creating a scholarship, or including a legacy gift in your estate plan to benefit Crafton Hills College, contact Director of Institutional Advancement Michelle Riggs at 909-389-3391 or mriggs@craftonhills.edu.